A cookie is information stored on your computer by a website you visit. Cookies often store your settings for a website, such as your preferred language or location. This allows the site to present you with information customized to fit your needs. As per the GDPR law, companies need to get your explicit approval to collect your data. Some of these cookies are ‘strictly necessary’ to provide the basic functions of the website and can not be turned off, while others if present, have the option of being turned off. Learn more about our Privacy and Cookie policies. These can be managed also from our cookie policy page.

IE10 and below are not supported.

Community branches out to dig deep for One Million Trees 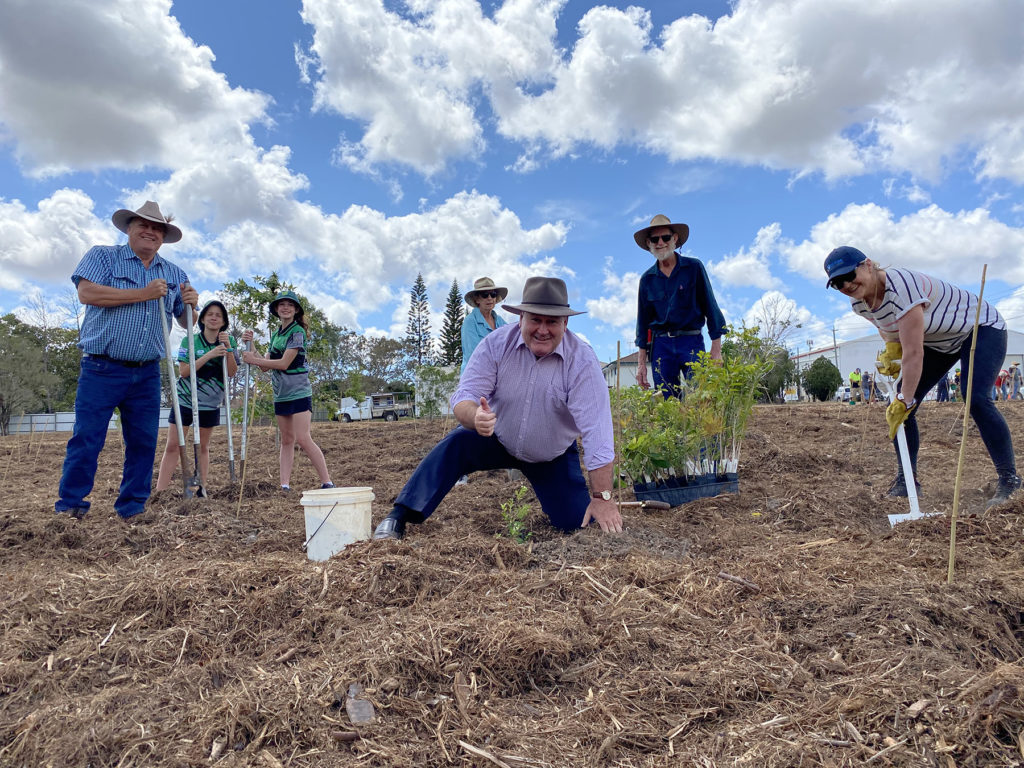 A community tree planting which saw about 500 trees added to Baldwin Swamp Environmental Park has officially launched the One Million Trees Bundaberg program.

Mayor Jack Dempsey said it was wonderful to see so many members of the community in attendance which reflected the combined effort that was needed to meet the ambitious target.

“Trees have a positive impact on our environment, health and community,” Mayor Dempsey said.

“They help to reduce the amount of greenhouse gas entering the atmosphere, prevent erosion, provide habitat for biodiversity and give shade.

“By Council working together with community groups, farm organisations and private landholders I’m confident we can dig deep and plant one million trees.”

Mayor Dempsey said the community response to the program had been fantastic, with a number of businesses and organisations already committing their support.

“We want to count every new tree being planted right across the region whether it’s in a park, a backyard or on a commercial property,” he said.

“Any tree or woody shrub planted anywhere in the Bundaberg Region since April this year can be counted towards the total so we encourage the community to dig in and help us get this done.”

Mayor Dempsey said local Landcare groups had played an important role during these early stages of the One Million Trees Bundaberg program.

Gin Gin Landcare president Ray Johnson said the target would be easily achieved if the entire community pitched in.

“I see no problem with one million trees,” Ray said.

“Takes a bit of effort and a bit of expense to get them in but it’s worth every bit of it.

“They’re the lungs of the earth, we need trees and lots of them.”

Mayor Dempsey thanked all the groups and organisations who joined Council for the One Million Trees Bundaberg launch, planting about 500 trees in Baldwin Swamp.

“This launch event is a great example of how achievable this target is if we all work together,” he said.

“As they say, many hands make light work.

“Let’s help to create a cleaner, greener future for the Bundaberg Region.”

To support the program he said Council had been working to identify a range of potential planting sites and would be offering incentive programs for residents and businesses.

“We encourage members of the community to submit other public planting sites for consideration as Council is actively seeking tree planting opportunities.

“If you’re a business, organisation or community group considering a large tree planting project get in touch with Council to see how we can support you.”

For more information or to have your trees counted towards the One Million Trees Bundaberg target email the project team at onemilliontrees@bundaberg.qld.gov.au or head to the website.